…At the Notre Dame vs Michigan Game, that’s where!… (leaders don’t hang out and maybe should).

The few thousands of my fellow Michigan fans — among the tens of thousands of Irish fans — were sour and only soured more.  By the end of the first quarter, “Take Gardner out” could be heard up there in the nosebleed section  – long before the Michigan quarterback had thrown an interception (he’d eventually throw three).  Brady Hoke, the 4th year coach who has failed to turn around Michigan’s heralded program, was the primary target of fan complaints — complaints that spread like we all hope Ebola won’t.  The epithets and expletives were flying.

Admittedly, I want to give everyone a fair chance; and I see the grays in things (that others see as predominantly black or white); and, you bet I believe it’s just too simple to scapegoat a football coach who, after all, doesn’t block, tackle, throw, or catch. I know my “Go Blue” Michigan fans will think I’m blind. But let me continue for a moment. 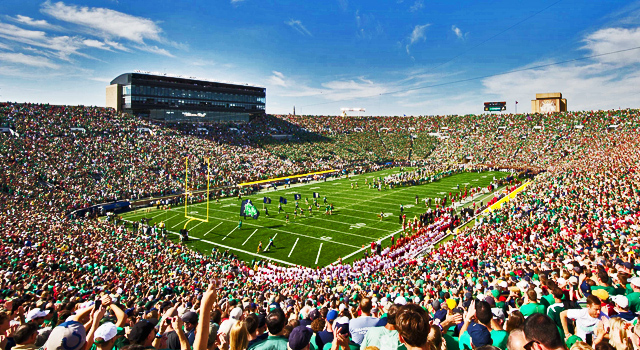 A chant broke out in the row in front of us. I think it went “Hey, ho (Athletic Director David) Brandon’s got to go.” Of course, as is almost always the case, the largest stores of grade-A vitriol were served up for the refs.  Never mind that we were three rows from the top of the upper deck end zone — about two city blocks from the field; my bleacher bench neighbors were outraged at the bad calls, furious once when a ref said a Notre Dame player was in bounds when he caught a pass. Old fart that I am, I cringed as middle-aged women tossed f-bombs further than our quarterback threw a single pass. Recapping: fault assigned to quarterback, coach, athletic director, and refs.

This is a leadership tale in two senses. First, most authority figures can’t stand to hear such negativity. I’ve counseled more than a few, “DON’T read the blogs!” But beneath the noise are important views, and you can’t afford to stop listening. Nixon, Reagan, Clinton, Obama – and their teams – all had moments of disparaging, ignoring or shooting the messengers. Parents write their kids off as “rebellious,” “going through a stage,” or “too young to understand,” but in doing so they miss the chance to learn and grow — from points that are genuine from the idealistic young. We have to go to those places, steel ourselves, and really hear the substance.

Second, whether we are leaders-in-positional-authority, or leaders-in-the-midst, or leaders-at-the-edge, we have to know that part of our work is to invite people to GROW UP! Football’s a game, and it gives birth to another game of armchair quarterbacking. But what struck me was just how easy, how passionate, and how widespread the scapegoating was.  Call me naive, but I was struck by how quickly people quit (cheering, for instance) — doing the work that only they can do and turning their frustration on “the adults.”

I’m at the beginning of a semester and will daily confront the reality that my students have all been “schooled” (those are ironic quotation marks) for passivity.  Many will meet disappointments by blaming me, their TA’s, or the grading curve, if they “fall behind” in the game. Our jobs as those who lead are always shot through with the need to invite them, challenge them, support them, inspire them, encourage them to be everyday leaders — focused on doing the work that only they can do.*

So, get out there and listen to what’s being said — find the value in it — and lead others to

* I credit my friend and mentor Ronnie Heifetz with this simple and sublime expression, “doing the work that only they can do.”