I have been in positions for 29 of the last 31 years (exceptions: first year of law school and first year as a lawyer) when people supposedly had to pay attention to me.  I’ve run teams, coached clients, taught students and most important raised three kids.  So, they looked to me.  I’ve made lots of mistakes utilizing the privilege of their attention.  One example sticks out.  I loved “Justice,” a class for which I was a teaching assistant at Harvard. Michael Sandel was a brilliant professor, the material was gripping, and the students great.  One day I got filmed by an education grad student whose job was to help folks like me become better teachers.  And, a week later he showed me the tape.  I wanted to crawl under the table. I was so B-O-R-I-N-G it was painful. God bless that fellow who was so encouraging about what I was doing right and gave me hope that I could do better in the future.

So, when we have positions of authority, what is it we want from students, staffs, and our kids?  Yes, of course it varies and the question is terribly broad. But don’t we always want their ENERGY! We want them at least to “pay” attention. We want them to “spend” energy understanding what we’re saying, and we almost always hope that they will leave more prepared to “spend” some time and “spend” some energy doing new things or doing things better. And this task demands something from us.

Springsteen sings, “You can’t start a fire without a spark.”  M.A. Hastings my former business partner (and business teacher) used to say, “You don’t light a fire with a wet match.” 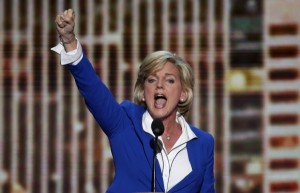 But a picture is better than my words.  Perhaps you saw my wife, Jennifer Granholm speaking on Thursday night at the Democratic National Convention.  If you have only seen convention speeches through TV, what you can’t appreciate is that the delegates are a bored and unruly sort.  They are networking, talking, napping, texting, stretching, yawning, and doing just about anything else but “paying” their attention.  When Jennifer stepped on that stage in a seemingly unceasing line of big names like John Kerry and Caroline Kennedy and Eva Longoria — not to mention the two headliners at the top of the ticket – she faced just such a crowd.  If you haven’t seen what she did, I invite you to check it out.  The level of energy which she brought – which the crowd then matched and fueled – was extraordinary.

So, what does this have to do with you?  I hope I’ve given you two pictures: one of me, thinking I was interesting, but with students who must have been bored out of their minds.  And one of Jennifer, with a message that she cared about very deeply, with energy she brought, and with energy that spread like a match to a pool of gasoline.

Robin Williams in Dead Poet’s Society grabbed students’ attention. Bruce Springsteen rocks from the top of his show.  Detroiters remember how Dennis Rodman could ignite a whole team by diving into the stands.

So, think of THEM to remind you of your job on this Monday morning.  Not a big chance I will bring the kind of energy my wife does, or that you will stand on a desk as Robin Williams might, but if you ratchet your energy up by — what you think is 50% — you might raise it by 15%, and that could make a load of difference in,