Many of my students are crossing the most significant life threshold beyond kindergarten.  They are starting real jobs.  One asked me to write about leadership for “new job jitters.” Initially, I thought the topic too narrow and my readership too old (oops, that doesn’t sound so PC, does it?).

The more I thought about it, the more I realized that it would help us to remember what others — particularly young folks — feel as they start work.  And it especially made me think that there was genuine value for us! What have we forgotten? What might be different if we thought: This is my first day on the job?!

What would you tell someone if they wanted to be an everyday leader on their first day at work?  I’d advise three things:

1. Live your values from day one.  Make two columns.  Write “core values” above the left column.  Then “behaviors” at the top of the second.  Be you.  If “growth,” “kindness,” “honesty,” “creativity” that tops the left column, ask what are the appropriate behaviors for your first day?  Or to put it another way:  If all these new colleagues of yours were to see you behave the way you want to be known — as though they were trying to guess your values — what would make them see you?  For example, “personal growth” is a biggie for me. So, I’d let myself be a little ignorant and ask lots of questions. I might offer to do some things that needed to get done — even if I wasn’t sure I could.  Because, I’d advise:

2. Be a contributor.  Leading at its core is making a difference for others, being active more than passive, a giver more than a taker.  This one may speak especially to us old jaded folks, who when the company needs volunteers we slink under the desk, anxious about how much work we already have. We might do well to remember a spirit of contribution.  My last piece of advice pushes the old envelope with the thrust of new research: 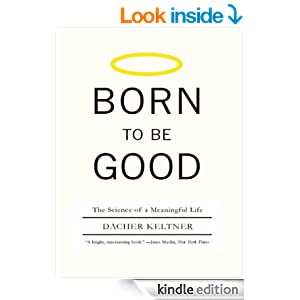 3. Shake a lot of hands and touch a couple of shoulders.  I’m reading one of the best books I have read in a very long time.  It’s called Born to be Good and is written by my colleague and friend Dacher Keltner. Keltner, a psychologist at Berkeley, has done amazing research in labs, and among aboriginal people. He builds spectacular bridges between the new science of MRI’s to read the brain, linking them to a fascinating view of primate evolution.  With head-turning research he makes a powerful case for how smiles, voice, and touch have terrifically powerful and positive effects. For example, some community activist petition seekers were instructed to simply touch those they approached for signatures; 81% of those touched, signed; only 55% of those not touched signed the petition.  Keltner provides example after example of how “touch” helps babies gain weight, mothers overcome depression, patients heal faster, and people in countless other circumstances who were touched to experience a reduction in stress hormones triggered by the brain which in turn tax various parts of the body.   Simple, appropriate, genuine touch can reduce the “new job jitters” of my young alumni, as well as building positive connections that can endure.

What would you tell a young person — or re-instruct yourself – about starting a new job (all over again)?

How should they, and you