By Katherine Crowley and Kathi Elster

We recently appeared on a late-night television show to promote our new book, Mean Girls at Work.  Our hosts, two male comedians, were very surprised to learn that women react to teasing, sparring and criticism very differently from men.  “When you insult or yell at one of your female employees,” Kathi explained, “She takes it very personally; she goes home and thinks about it.”  “Really?” one of the hosts responded, “I find that hard to believe.” He then turned to his female assistant and asked, “Is this true?” “Absolutely,” she said, “It really affects me. I go home and cry.”

Taking things to heart may be a phrase that encapsulates a primary difference between men and women at work.  Relational by nature, women take their work relationships personally, and invest in work emotionally. The female brain is programmed to retain and remember the details of conversations.  Language is the vehicle through which women connect and befriend.

Men, on the other hand, seem wired to accept that the workplace is a competitive environment, and that competition sometimes includes delivering and receiving verbal jabs. A recent study form the University of Chicago discovered that men are 94 percent more likely than women to apply for a job where earning potential is dependent on outperforming their colleagues. This would support the general view that men experience work as a forum for delivering results and beating their competitors.

Given this fundamental difference between the sexes, what guidelines might help men and women interact with fewer hurt feelings?

One tip for men:

Understand that most women are likely to hear and respond to your words differently than a man would. It’s really true that words you speak to a woman will leave a stronger imprint and have a longer-term effect. Even if you’re only joking, words that a male coworker might shrug off like “slow,” “stupid,” “lazy,” “difficult,” “weak” or “loser,” leave a lasting, negative imprint with many women. To get the best performance and the greatest loyalty from female employees and coworkers, you’d do well to choose your words carefully. 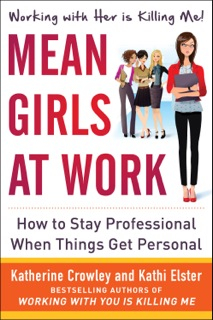 One tip for women:

Accept that you probably are more sensitive to critical or sarcastic remarks than your male colleagues. If negative words do leave a stronger impression on you, then your self-management plan should include finding ways to release the impact of any remarks that hurt.  We recommend exercise as an excellent remedy for releasing toxins – including statements that don’t feel good.  You may also want to run situations where a man says something cutting to you by a trusted male friend. Let him put the comment in its proper perspective.

Katherine Crowley and Kathi Elster are the co-authors of Mean Girls at Work, Working for You Isn’t Working for Me, and Working with You Is Killing Me.  Executive coaches located in New York City, they can be reached via their website: www.ksquaredenterprises.com.