The Greeks had the most instructive villains who spoke to our human foibles.  Many of their names and myths live on, and they still reveal the ways our character and leadership can go awry.  Narcissus – whose name lives on – was in love with himself and thought himself too beautiful for any other; his punishment was to fall in love with his own reflection in the river yet (obviously) be unable to embrace that visage.  Then there was Sisyphus filled with hubris, thinking himself above all others, whom Zeus sentenced with the most droll worldly task, to push a bolder up a hill every day, only to have it roll down before he could reach the top. 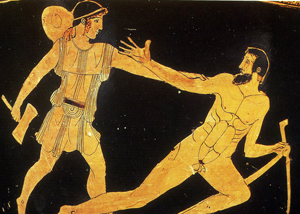 Today I offer a great lesson about leadership and excellence from the story of the ironsmith bad man, Procrustes.  Procrustes terrified passersby for he would drag them to his iron bed.  An iron bed sounds bad to start, but it gets worse.  If people were too short for his bed, Procrustes would use his tools to stretch them.  And if they were too long for his bed, he would cut off their legs until they fit.

I thought about Procrustes while watching Bob a virtuoso carpenter working at our house.  His carpentry belt must have weighed 40 pounds; he had a tool for everything; and his experience had taught him a thousand ways to attack a problem.  He did the opposite of the old saw (forgive the pun) which says that if all you’ve got is a hammer everything looks like a nail. Unlike Procrustes, Bob can approach every challenge and situation and see it for what it is, instead of needing to force it into some pre-determined pattern.

Procrustes offers us the antithesis of mastery or excellence.  Mastery involves seeing what is, for what – or who – it is.   Each child is different. Each day they’re different. No sale is the same, nor is any customer; the idiot driver may well be somebody’s grandpa or an out of town visitor. A boss who’s being a real ass may have any number of hidden stories going on. And your usual approach to just about anything, may not really work.

I’ve noticed how great it feels to choose not to be limited by patterns; even those that have been helpful.  In my early days of coaching, I tended to make my clients fit my Procrustean bed. I had a few tools and had to figure out how to make them relevant.  As I’ve gotten older, I feel like I can pay much more attention to the client at this moment, in these circumstances, and much less to my tools.

Procrustean tools tend to treat the other (child, staff member, colleague) as an object – someone (or something) to be told, changed, fixed, or otherwise acted upon. By contrast, tools of mastery generally involve seeing the other as a subject and therefore asking, seeing through their eyes, seeking clarity about their perception and intention.

I’d love to hear the ways in which you play Procrustes or build greater mastery, as you