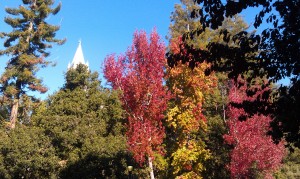 I love teaching at a great public university — the Michigan of the West, because my daughters went to a great public university, the Berkeley of the East. My undergraduate students seem so familiar, like my kids’ friends who’d chat with us across the kitchen counter, rummage through the fridge at 1:00 AM, and flop on our couch to watch DVR’ed shows. I worry about them all as October 1 rolls around. I teach about 15 foreign students, and they’re particularly special this year, as they remind me of our daughter who is doing her junior year in Argentina. October 1 is a reality and a metaphor, the frivolous gives way to the banal. It’s a lot like sophomore year in that way — indeed October is doubly hard for sophomores. October is when the romance is over. The first few weeks my students were tired from the elation of coming to — or returning to school. They were partying hard, meeting or re-meeting people, joining exciting groups, and classes looked enticing.

The work builds up. The sleep goes down. The mid-terms rise up like storm clouds. And exciting ideas morph into tedious tasks. (As I recall surveys showed that the hope and enthusiasm of our employees at the state government fell quite a bit in the 6-10 year period of their tenure, in much the same way.) Those of us teaching, parenting, supervising, and administering schools sometimes see these drops as routine, or we just don’t know what to do with them. But their effects are real, and for some kids — especially those dealing with mental health issues — potentially critical. I have three suggestions:

1. Watch the clock and calendar. Know the drop is coming (if it’s not already here). And know you have to lead in a different way. YOU need to bring energy (though they won’t often match you) and pay attention.

2. Help your “October sophomores” see the “normalcy” of this rhythm and know that it does not reflect some unique pathology or moral failing on their part. When you feel lost in the forest it’s consolation to know that it’s nearly impossible not to get lost in this stretch. I admire my foreign students who are learning in a new language, traveling in strange streets, meeting all new people AND THEN have midterms and papers in our foreign language on top of everything else. It’s easy for them to think everyone else is making the transition splendidly, but there’s something wrong with them. We need to tell our kids that there would be something wrong with them, if they didn’t feel this challenge.

3. We can help by shaping the path for them. I’d contrast path-shaping with one of my natural strategies which is to have them do a lot of moral and character and psychological reflection on how to get back on track. I don’t think that instinct of mine serves most so well in these times. Ten days ago my wife saw and responded to the October early warning signs by articulating clear, discernible steps for our sophomore son to approach his work (and letting him know that we’d be there beside or behind him). It was like throwing a couple boards under tires that were turning in the mud or snow. He got some traction and moved. He’s now rolling through the sophomore slog at a slow but certain pace.

Autumn can be beautiful but it its natural challenges approach: Shorter days, falling leaves, hints of cold. Now’s a good time to (a) see the energy drop; (b) interpret it for those who need to keep moving; and (c) shape a clear, well-marked path for the work ahead.

Whoever your “sophomores” are, now’s a good time to help them see and build success, as you