95% of America (and 80% of my household) watches the oddballs like me and they wonder: How can you guys possibly sit there and watch golf on TV? B-O-R-I-N-G!  But if watching golf must have some redeeming value, I will say that watching The Masters this weekend completely coincided with a line I read in a great book out this month called The Other F Word: How Smart Leaders, Teams and Entrepreneurs Put Failure to Work.  Here’s the quote

Cool distinction – no?  Jordan Speith, whom people are saying may be “the next Tiger Woods,” is only twenty-one.  He led the other golfers from the beginning until the end of the Masters tournament. On Sunday, he held a sizable lead, but Augusta National Golf Course has some scary holes, where water or sand or woods can eat your ball and topple your dreams.  On three occasions that I remember, the seasoned announcers — themselves exceptional players in their day — made comments like, “I’m sure he’ll lay up here,” meaning play it safe. He had a big lead. He could coast in.  And every time, he played not to fail but to succeed. Fans of almost any competitive sport have seen what happens when a team with a lead plays so as not to lose, losing the very formula that gave them their lead in the first place. 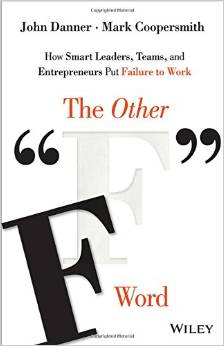 Reading that question above I realize that four years into university teaching I’ve begun to nibble, tweak, fritter, wamble and every other verb — real or made-up — that stands for “playing it safe.”  I came in with BIG ideas, but now I’m playing at the margins. So, I’m determined to use the wisdom that John Danner and Mark Coopersmith have shared in this fascinating look at Failure, the other F Word.

The authors respect Failure. Much of their counsel involves avoiding the big F-ups. Yet my takeaways kept coming back to the other, other F-word: Fear.  Failure hurts. We remember it. And we fear it. Yet, Coopersmith quotes his father, a pioneering psychologist, with the irony: “Fear of failure is the best predictor of failure.”  Tell the truth: You rode your bike fearing failure …. and crashed! Your hands got too tight on a steering wheel. You were in front of an audience when fear of failure grabbed you. The examples are near endless where we pull in, play it safe, and get the very thing we do not want: Failure!

Two closing thoughts: First, at least think about what big success would look like, and whether you’ve gotten overly cautious.  I’m guessing my friend and frequent commenter Mark John Hunter will be quick to write:  “Woe, Dan. Hang on. Too often you try to succeed big and you pay the price, as your boss cuts your legs out from under you.”  So, let me hasten to add:  if you are a boss, make it safe, invite you people to seek some big wins.  The economic roadside is littered with organizations that could have used this book, to