Continuing thoughts on “paired leadership” – 2nd in an ongoing series.

As I wrote last week, in some key paired leadership situations there are pure equals, like spouses and co-founders.  But sometimes your paired leader or partner is “beneath” you in the hierarchy.  You are each vital to the team and organization, and of course, vital to each other.  So, you can

This last scenario explains why people don’t quit companies. They quit managers.*  When you are “above” your partner, e.g., as a boss-to-worker, parent-to-child, teacher-to-student, police officer-to-citizen, then there are a few key lessons for generating transformational, partnership, or paired leadership.  I will share these “top-down partnership” lessons in the coming weeks.

Let’s begin with the template for all hierarchical partnerships:  parent-to-child.  We begin a new job, as we began life itself, in huge dependency.  And if the parent/boss does it right, then the  child/worker grows more and more independent, becoming a truly equal partner, and possibly surpassing their “leader” upon life’s social ladders.  Thus, this diagram below left shows how the empowering parent or manager is always pushing the bar towards horizontal (in the direction of the blue arrows), such that the two become peers, able to fully challenge, support, and partner with each other. 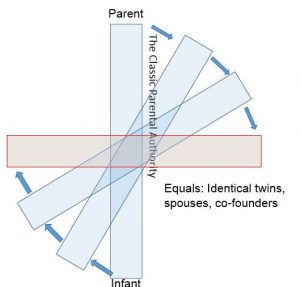 I begin with a story of how I nearly completely destroyed this ideal path to partnership.  Today the story.  Then in the next couple weeks I — and I hope you’ll partner along with me — will share other key insights from this nearly tragic story line.  Perhaps you will recognize yourself in my story — as you have been or are a parent or boss.

I have provoked more difficulty and more pain for my daughter Kate than I have generated for any other person on the earth (and likely caused more pain for her than anyone else in the world has caused for her).  This is a painful admission:  Mea culpa! Mea maxima culpa!  And…partnerships almost always work in this reciprocal way:  No single person on the earth has prompted as much pain and defeat for me in my life as has Kate.**  She has grown up (and I have grown down from my imagined heights) so that she has become my single most important and productive partner for leadership, learning and growth.  We are today equals.  We are the red horizontal bar, and we now gently lift each other’s side of the bar a little higher, bit by bit, always coming from and returning to equal respect.  But, five, ten, fifteen years ago, if you had asked my wife, relatives — or Kate or me — if that would ever be possible, the answer would have been one of uproarious disbelief. Indeed, if she had been my direct report rather than my daughter, she would have (wisely) quit my employ a long long time ago.

Kate brought challenge.  Our first and beautiful baby, she was tortured by some literally unspeakable, hours-long pain every night for about three of her first months. She cried inconsolably. Jennifer and I took turns in the basement with her, so the other could get one night’s solid sleep. Poor thing was, of course, powerless to communicate. Consequently, we were powerless to understand or try to find relief. She grew out of that pain. And grew into a marvelously driven, confident, challenging, and idealistic young person.  She chose how she would dress, she asked about what she didn’t get, and she fought from a sense of justice from her earliest days.  We were two lawyer-parents blessed with a budding litigator.

It didn’t feel marvelous when she asked “why?” of EVERYTHING and became more sophisticated and intellectually provocative with every passing year.  Perhaps you had a child whose “terrible two’s” seemed interminable, or perhaps you have someone on your team in a permanent state of pushing back, unceasingly challenging you and everyone else.  Or flipping the axis for a minute, perhaps you and your manager/partner, continually butt heads on an issue in which you are both 100% convinced you are right (but of course your manager gets to “make the call.”)  Well, this was Kate and me.

I would read her the story about “The Zax” from Dr. Seuss’s BEST book, The Sneetches and Other Stories. The north going Zax and south going Zax meet in the middle and neither will budge.  So this on the left was us:

And then this was us ⇒ 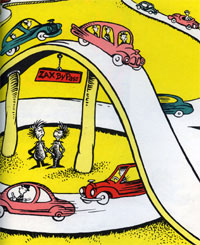 As family and world bent around us, we did not budge.

In one struggle over who-knows-what, we were face-to-face in the driveway. I denied her car keys until the issue was resolved. After 30 minutes, her sister and friends went back in the house til the standoff ended.

I will stop here for now, mindful of your time, curious about your thoughts.  I had the position of authority, so why did I (a reasonably smart guy, with a decent amount of self- and other-awareness, steeped in theology, psychology, and politics) fail so epically to “lead with my best self?”  What is the central challenge, do you think, in creating powerful partnerships with those “beneath” us (who may vex us)?

I’m curious about your honest take on when (if?) you have been in such straits: What could or should you have done?  Why were you like me stuck and ineffective? And what got you unstuck?   So, please do comment. I’m curious about the lessons you have learned, grappling with how to partner when you have greater power but aren’t using it well,

leading with something other than

*A 2015 Gallup study of over 7,000 American adults found that over half had quit a job because of their boss.  Conversely, those who felt their boss was approachable were among the most engaged of workers; managers accounted for 70% of the variation in employees’ reported levels of engagement.

**A word about verb choices: I wrote that she and I “prompted” or “generated” bad feelings in each other.  I do not use the word “caused.”  Because I allowed Kate’s behavior to hurt and defeat me.  She “triggered” me or “incited” me, yes, but the launching point for this column and those to come is that I had to (failed to) be responsible for my own responses to her behaviors.  Way too often I did not “respond with my best self,” but “reacted” with an instinctive, fearful self.  So, in these opening sentences I do not BLAME Kate for my difficulties; I was responsible, although, obviously, it took — is taking — me years to figure out how to respond constructively, intentionally, and lovingly.