If nobody’s ever embarrassed you in public – even before a public of one — skip this column.  But if not, I offer some serious counsel on power and authority (related to but not the same thing as leadership; see footnotes)*.

I debated in high school and college, and I will never forget one time when I was thoroughly put on my heels and pushed around the room.  That unforgettable Friday night at the University of Pittsburgh I felt like a pile of hair and dust at the end of a thick and wide industrial push-broom.  It didn’t matter that three times before we had soundly defeated that evil team from Catholic Central.  This time they ate us for breakfast, lunch and dinner. 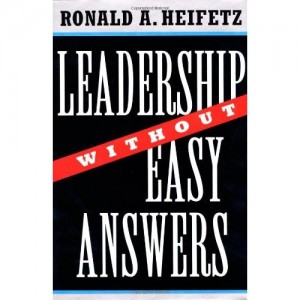 I was reminded of that tale-whipping while watching the first presidential debate last week.  Gosh, my partisan self hates to write this. But there it was. Mitt Romney was authoritative.  He was as my friend and leadership mentor Ronnie Heifetz observes in his outstanding book Leadership Without Easy Answers, like the silverback gorilla. He thumped his chest. He said he would do what authority figures do — and are expected to do in crisis — he would offer protection, direction, and order.  He was the medium for that message — sure, advancing, pointing, pushing.  He told us we were hurting, and he said he would remove the pain. And for the vast majority of that 90 minutes, he knocked our reigning gorilla from the high point he has occupied for four years, and he would not let him back up.*  I suspect the President walked out of that room, got in the car with the First Lady and said, surely not in these crass:  “I just got my ass kicked.”  I suspect he also added, “But it won’t happen again.”  On the 16th we may see the Thrilla in Manilla.

Can you even imagine battling your nemesis in front of 60 million people for 90 minutes?  So, what relevance, you ask, can it possibly have for us mere mortals?  Well, if you haven’t explicitly done so, I invite you to bring to mind your own nemesis  – someone whose values perhaps are quite different than yours, someone who perhaps wants to have the kind of influence that you also want to have. Maybe it’s in business.  Maybe it’s your ex!  Maybe it’s a bully. Maybe you’ve already had round one…

Three lessons stand out:  Before.  During.  After.

1. Before:  From Governor Romney.  Before a possible square-off: prepare like crazy.  Romney had so clearly schooled himself deeply.  He did not bring a knife to a gun fight.   He was prepared for battle. If you’re going to court, the board meeting, a sales proposal, a mediation…Man, you’ve got to know your stuff, and well enough to know you know your stuff.

2. During:  From the President(‘s unfortunate performance) and with credit to my friend Heifetz again, “you don’t answer a tuba with a piccolo.” When somebody is whupping up on you, that is not a time to go inside and get quiet, not a time to be fair or self critical, and not a time to concede points to your challenger.**  There will be a time for all of that.  But not in the heat of the battle. You’ve gotta stand up. If for instance you’re being bullied  say clearly, “I will not speak to you like that and I do not accept your speaking to me like that.”  Put the piccolo away.

3. After:  If you lose, rebound, and do it fast.  Obama was pretty crisp and quick the next day.  (He also did not admit in any way that he lost.  If you want to be the silverback, you don’t have to be the one saying you lost.)  Next time, Romney will start at the top of the hill with Obama.  I imagine this time both will have their footing.  I am sure Candy Crowley is going to have both hands full refereeing at Hofstra on the 16th.

Power and authority don’t always matter.  But when people are looking for “who is in charge,” you have to be ready to play the gorilla game to

* As Heifetz would hasten to add, we may be looking for a gorilla, but we need a leader.  Indeed, Heifetz offers great counsel against our desire to be led by someone who claims the ability to “solve” all our problems.  Instead he argues that often leaders actually need to stress their people to face the tough challenges rather than tell them “I will take care of everything” (something of course we continually seem to demand from both candidates).

** In my younger days I would have argued for a more conciliatory approach, but I now think this is naive.  There is a time for that, but this was not it!  If one is extraordinarily adept perhaps they can in some martial arts way use the other’s over-aggressiveness to expose them. Many arm-chair quarterbacks have had all kinds of clever ideas of how Obama could have done this.  Good for them.  But (a) incredibly hard to do, and (b) of dubious value when there is a level of head-to-head battle.  The biggest thing the President could have done would have been mostly non-verbal:  to physically face Romney head on, to not allow interruptions from him, to insist that Jim Lehrer be fair (some may have seen Romney as a bully but he sent the message, “I am in control” and balanced it with some deference at other points).  The symbolism matters. Strength matters.  There’s time to be subtle later.