Carol Dweck a long-time Stanford psychologist burst onto the scene with Mindset: The New Psychology of Success at the end of 2007.  It’s been around for a long while, it will be around for a much longer while, and I finally got around to reading it.

I think it is THE simplest yet possibly THE most profound book I have ever read: literally two ideas that change the way you look at everything, starting with yourself. 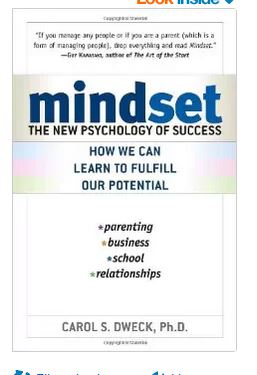 Since most people read this on Monday morning, I’ll try to be as simply elegant as Dweck:

1. There are two kind of mindsets people have.  The fixed mindset or the growth mindset.

In a fixed mindset, we act as though our talent, intellect, character, worth, attractiveness, ability, etc., are largely fixed.  We have a quantity, like IQ, natural athleticism, physical and psychological resilience, tonality, you name it.  Of course, this is not just at a surface level.  We have all in some measure been trained to think and believe at a deep level that this is the way it is, and this mindset heavily influences our behavior.

In a growth mindset, by contrast, we believe that we are malleable. No matter where we start, we can grow. We’re NOT necessarily clumsy, atonal, bad at math. Instead, we can learn, try, and grow.

So, here’s what makes this book crazy-important:

On the surface, it’s so easy to think you are in a growth mindset, but I hardly know anyone who consistently lives that way.  I know I have operated with a fixed mindset, so I have avoided all kinds of things: Calc, Chemistry, Econ, approaching a pretty woman (still wonder why my wife bothered with me), asking “stupid questions,” acting, performing, ballroom dance, painting . . . all because I thought I had fixed abilities or attributes.  Worse, I have underestimated others; pre-judged them as not-so-smart, destined to lose games; or, I saw them as unable to expand their emotional, intellectual, or other capacities. In a word, running from growing into my best self.

The social costs that Dweck calculates are pretty terrifying. Her extensive research, for instance, has demonstrated that people with a fixed mindset are much more likely to lie because they need to defend their fixed qualities, rather than see failure as a temporary fact, from which one can learn and grow. A fixed mindset causes teachers to think that some students can’t learn. People who have a fixed mindset — or are induced in a lab to believe that success in an activity requires some “fixed” talent — quit sooner, lie to cover their mistakes, or simply do not achieve as much.

From a leadership standpoint, let me finish with a few points — for bosses, spouses, and parents.  With a fixed mindset, we can so easily see our staff member, spouse, or son as fixed. Their capacity is limited.  They won’t grow, because they can’t. We blame them for their fixed-ness.  Further, we think we are fixed: we haven’t been able to figure them out before, so we just don’t know how. We quit, rather than keep trying. And we see relationships themselves as fixed; we don’t get along; so, we won’t get along.

The growth mindset — which we can consciously choose to take on — says:  try, fail, try, learn, fail, learn — maybe get some kind of coach(es) to help you learn, try, fail, learn, and in time you get better and

Lead with your better self!