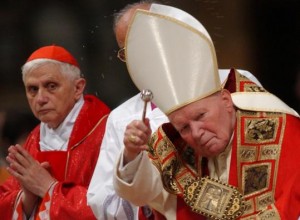 In Sunday’s New York Times, the great novelist Elmore Leonard (University of Detroit High School, 1943) imagines what his father would say to Elmore’s mother about the current situation at the Vatican: “You see, we’re gonna have two popes at the same time — both infallible — and you don’t think there’s gonna be trouble?” If you’re my age or older you can imagine the 1950’s kitchen where Elmore conjured this scene.

Well, geez, if we ever wanted  — and I always do — to look at the difference between Authority and Leadership, now  is the time.  With the notion of papal infallibility — and soon some white smoke — in the air, Authority is on parade. Maybe Leadership will be, too.  But where will it come from?

The Church structure — Leonard’s ironic line about “two popes” aside — and resulting church culture is exhibit one of the human — no, it’s broader, the animal — desire that there be a single authority figure. “THE” leader. I am beginning a new campaign today to end the hegemony of “the” leader. I declare — from my utterly self-appointed, non-authorized, untitled, unpaid, and non-certified position of AN everyday leader:  Yes, there will often be “a” leader, but “the” leader is officially and forever and infallibly proclaimed to be an idea whose value is trumped by its dysfunction, and so it must be rejected.

If you want to double your leadership effectiveness — my told titular claim — then In invite you to do two things.  Internally reject the idea that there is “a” leader where you work, live, play or study.  He or she has a slot, a title, money, power, some experience, etc.  But YOU, every bit as much as he or she, can do what “the” leader should do:  (a) Be responsible for the whole and not just your role, division, etc;  (b) Encourage and empower others – whether they are “under” you (“under,” really?), or side-by-side with you, or yes “the” boss” of you; (c) help clarify the visions/goals of success (anybody can ask great questions, like “tell me WHY, again?”; and (d) tell the truth about problems and opportunities.  In other words, act like “the” leader, because one decent thing about “the” leader is at least somebody feels responsible for the whole.  But why should they be the only one?

Second, turn somebody else into your co-leader/partner.  Maybe you’re the chief-of-staff, and she’s the boss; be explicit about partnership. Maybe you’re the dad and she’s the mom. Maybe, how about this:  You’re the teacher, and she’s a kid that other kids pay attention to.  In other words, this half-helpful idea of “the” leader is SINGULAR.  But so often leadership is shared, or paired and 1 + 1 = more than 2.  I remember the SHOCK I felt when I was about 12 and my mom told me that she and Dad had “projects;” that they talked about each of us and focused TOGETHER on what they thought one of us needed over a stretch of time. I was surprised by their intentionality, but the very idea that they were working as a TEAM kind of blew me away.

Let me be less abstract.  Consider (1) watching how you can “team” lead better with someone in your world, and start by (2) telling them, “I think we can be more effective if we look at how we can act better TOGETHER.”  A principal can tell a teacher that; or vice versa. A husband, a wife. A mayor, her city manager. To take one example, the power of the Catholic experience will be driven much more by the relationship between the pastor and the pastoral assistant, and by the everyday leaders reaching out across their pews, than from the next infallible pope!

My point is that you have to consciously swim against the deep and powerful river-current of thought and culture that creates “the” leader in your head, and unwittingly diminishes the freedom, creativity, power, responsibility, and partnership of us, “THE everyday leaderS.”

Lead with your AND SOMEBODY ELSE’S best selves

* The scope of papal infallibility is greatly misunderstood. The Church, which can be as semantically gymnastic, as the best first-year law professor, puts strict conditions on when a papal statement is infallible. It’s no casual matter. I don’t mean to contribute to the misunderstanding by my casual reference, but after all infallibility — even constrained by rules — is about as high a claim to authority as one can imagine in our post-modern, equality-minded world.