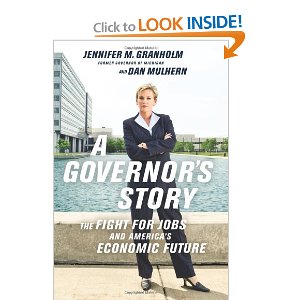 The release of our book A Governor’s Story: The Fight for Jobs and America’s Economic Future has offered me a chance to re-learn a key lesson about bandwidth. It was fascinating at major news stations in D.C., New York, L.A., S.F. and Ann Arbor to sit with my co-author/bride/governor, and to observe the responses we got. Now, it is A Governor’s Story, and I was not that governor – neither elected, burdened, empowered, nor tested as Jennifer had been.  I didn’t expect to be treated in the manner that Jennifer had earned.  But what was so obvious is that people had assigned me some pre-determined bandwidth.  And I had only the scope of expertise that they would accord me.  It varied dramatically – from zero interest with Piers Morgan’s show to a genuine opportunity on NPR’s “Forum” to weigh in on the huge issues Jennifer and I had been grappling with together over fifteen months of writing.  But the re-learning I took away is that assignments (of bandwidth) were always being made.  You might enlarge your bandwidth, but you always start with what they give.

As you likely know, I’m obsessed with the massive supplies of untapped alternative energy. Not wind, solar and all that good stuff, but human energy.  Vast squandered amounts of power lie dormant in prisons, senior centers, neighborhoods, places of worship, offices, homes and classrooms. So often people look to “the leader” for rescue (or to condemn when things don’t work).  Either way people give away (their) power and responsibility to someone else. They give “the” leader all the bandwidth, and they relegate themselves, but also their peers, colleagues, neighbors, and pew mates a tiny spot way down around 1700 on the AM dial, or maybe just a blip of HAM radio frequency.  Kids learn that their opinion doesn’t matter. Workers learn that they have nothing to learn from or teach their peers.

For bosses and parents, the teaching of Kouzes and Posner cries out:  “Credible leaders believe and act on the paradox of power: We become most powerful when we give our own power away.”  Jennifer (and our PR team of Liz and Carole and Karen) did that for me. They opened bandwidth for me, telling producers that Jennifer and I both had ideas to share.  Jennifer shared the stage generously, not to placate my whining self, but to offer listeners-viewers a more dynamic exchange. When you give your power away, people (me in this case) find their motivation and output climbs.  And despite the fear of many authority figures about losing power, they end up being respected more by their people not less.  After Jennifer helped create more bandwidth for me to speak, I found it a whole lot easier to shut up and listen to her.

So what? Well, for everyday – unauthorized – leaders, as I wrote last week about sibling rivalry, we don’t have to buy into the idea that the only opinion that matters about work is the boss’, about ideas is the prof’s, about g-d is the rabbi’s, and about policy are the talking heads and elected officials.  We can choose to give the power of our attention to energize interns, administrative assistants, and our peers across departments and across fences.  If we open up bandwidth for others – by listening to them ourselves, and by promoting them to others as our media team promoted me – we bring more energy into play, driving up their commitment and output.

My favorite place these days to give away the power of my attention, and to widen my bandwidth to listen is to my Mom and Jen’s parents.  It’s great to take in the views and wisdom of elders as I and they strive to