So, 46 days ago Fr. Mark, instead of collecting money at the offering, distributed purple envelopes containing cold hard American cash.  There were no receipts.  You just took it.  I got $100; Jack got $10 (Jennifer was out of town that day).  We were asked, as in a famous biblical parable to invest “our talents” and bring back more. 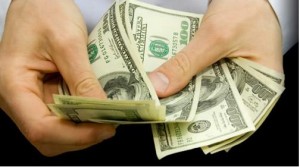 This was Fr. Mark’s plan – or perhaps fantasy would be a better word – to take our parish down the road of raising $65,000 to build an orphanage in Kenya.  Fr. Mark and the parish’s authorities tested Kouzes and Posner’s famous dictum that “credible leaders believe and act on the paradox of power: we become most powerful when we give our power away.”

St. Augustine’s parish in Oakland is a humble place.  Mostly working class and overwhelmingly young families and seniors share an insanely high cost-of-living.  Yesterday was collection day. And last night was a potluck, the raffle of an iPod and iPad, and open mic to reflect on what had happened.  Then Fr. Mark would announce how far we’d gotten.  The stories are too numerous for a Monday, but here’s a few quick nuggets:

Fr. Mark’s message yesterday was better than mine.  As he said, “no one was too old,” “had no talent,” or “had no time.”
What was astounding was how much energy was released when Fr. Mark gave the work back to the parish.  It yielded results.  And one of the biggest results was the process of working towards a shared goal, where everyone’s contribution mattered and brought people together in an uncommon way.  It was our relative poverty and not our wealth that created richness in the parish.  A “big donor” or “major philanthropist” decidedly would NOT have saved – but would have ruined the day.
There are still a few more activities on the calendar.  But we’ve already raised $73, 495 . . . for this:
Provide a vision and give away the power today to
Lead with your best self,
Dan