As we swim in the national soup of a presidential campaign, the best learning about leadership lies outside the usual back-and-forth.  Whether we are leading in an office or company, a school or family, a church or neighborhood, we have to grapple with IMPRESSIONS and FEELINGS and not just data and facts. I offer:  an example, a query, a hypothesis and an implication — all conveniently in less than a page.  The examples come from the Gallup* website and Real Clear Politics** poll summaries: 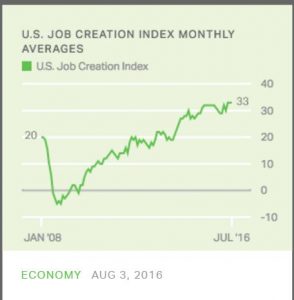 EXAMPLE:  The chart at the left shows the net percent of people saying their companies are hiring/expanding their workforce vs. those letting people go/reducing the size of their workforce.  So, for example in the survey last week, Gallup found that 44% of people say their firms are expanding, 11% contracting, for a net of 33% who say they are growing. You see the strong upward trend from January 2009.

QUERY:  Why is it that both candidates, so much of the media, and people on the street take it as a truism that we are on the “wrong track,”  (See chart below, where the red trend line represents people feeling we are on that wrong track.)  How do they “feel” this when so many “facts” trend as the ones on the green chart above do — consistently upwards?

How is it that despite eight straight years of job growth, the “right track” (black) trend line slopes downwards?  (For political insiders, whether right- or left-leaning, see notes below.  I’m offering this contrast in trends not to prove the underlying economic fact, but to explore it as as a leadership quandary.)

HYPOTHESIS:  For leaders of all sorts, I posit this:  Just as individuals feel and their feelings can run counter to facts, so also do teams, cities, churches, and countries feel —  independently of the facts.

IMPLICATION:  Leaders have to ENGAGE with people where they are.   Feelings are real.  Trump is fanning the fearful wrong track feelings. And, Hilary is rightly afraid to tell people they are “wrong,” for “people feel how they feel.”  The challenge, however, is to engage them, to listen deeply, and to listen well enough — and without defensiveness (a challenge for Trump, Clinton, me, and most other humans) — so that we “get” them. Maybe when we do this, they will be interested in “getting” us.

Those who feel afraid or left out will most likely see that those (of us) in the privileged positions of parent, pastor, principal, profesor or general partner are, factually, way better off than the average Joe (not to mention the single mom Jolene).  The powerful and privileged really need not worry about our jobs, our kids, our police, etc. (True, they also don’t always see the hours often worked by the empowered, the risks taken, the worries about those under their charge; but as leaders we mostly have to just suck that up!)  If we really listen, if we listen so hard that they feel heard, we can also talk facts, and ask what they make of those. Only through listening and respectful engagement, however, will we know what’s really going on . . . with our rebel teens, disgruntled workers, lonely parents, irritable customers, or fearful voters.

Feelings first.  Engage by listening, second. Respectfully share your facts and feelings, third, if you would

Footnote for political insiders on the right: The facts of people’s perceptions are clear; they are worried. I accept that. Yet, the facts on job growth, good jobs growth, etc. are equally clear.  Other facts, offered by some to suggest the economy is really bad — like numbers of people who have dropped out of the labor market are grossly distorted.  The “real unemployment” rate has dropped from 14.2% when Obama took office to 9.7%.  If we asked as Ronald Reagan famously did, “are you better than you were four years ago?” or eight years ago, the answer is markedly yes.  This does NOT mean I think you are wrong! Instead, I would return to the point of this blog about understanding “feelings,” to ask:  Just what has YOU feeling that the country is so off track? What’s bothering you so badly? I believe it’s real for you.

Footnote for political insiders on the left: I am sure not saying that “the system” works for everyone, nor that people don’t have good reason to “feel” left out or like our train is on the wrong track.  I am only saying in all cases — from national politics to an alienated teenager — the leaders’ (plural possessive) job is to understand first.