Cough it up buddy – another lesson in managing mistakes

I spent a lot of time working a room of 120 people, as they were doing assignments to assess and strengthen their leadership practice. And I found myself in crazy disbelief at how backwards some organizations and supervisors seem to be. Two incidents stood out.

One person said, “we used to operate as a team and be encouraged [like at Google] to find creative ways to use our talents to impact the mission, but the new boss and her boss say, ‘just do your job. We don’t want you doing more than that.'” One of this woman’s co-workers left; another was pushed out. None of these three workers could understand operating without the adult empowerment that had been part of the old manager’s way and had made work great – fun to come to AND productive. A second woman at my training workshop talked about how her boss  had for three years encouraged her to expand her reach and skills, and spread her wings. This boss has now taken to reminding her, “you are classified as a secretary; just do your job.” And this woman’s utterly perplexed; at our lunch table you could feel her hurt and confusion.

A quick note on the first situation. There’s been a change in management and the new managers have the prerogative to set the rules and style. Clearly they have control issues. We all do. But for goodness sake, check your control instincts. A 21st century leader’s job is to EXPAND and GROW people’s ability to contribute. Period. If you’re shrinking your people you better ask yourself: What am I so afraid of? And tell yourself: my job is to grow people. Not to shrink them.

What was happening in the second story? Pause…Think about what you know about human nature. Why was this boss – who had been totally growing this woman –  suddenly dragging her down and making her small?  The boss is perhaps angry at, or afraid of something, I suspect.  But why all of a sudden? I’m almost certain my lunch mate made a mistake! I suspect that she did something bad with the freedom her boss had enabled and she way-overstepped some hidden line. Don’t you think? And maybe she did . . . perhaps said something to her boss’s boss, one of her boss’ peers, or even to the CEO? Maybe she said something to a client or a neighbor? Something that embarrassed or threatened her boss or messed up the business.

Have you ever had that experience where you’re getting the cold shoulder, you figure you’ve screwed something but, but you have NO IDEA what you did.   In this case, and maybe yours, the woman actually asked the mentor-turned-mental boss who denied that anything was wrong.  The boss wouldn’t cough it up. Another lesson about mistakes and management.

In a world where managers (hopefully!) encourage people to spread their wings, mistakes will be made.  Too often bosses chicken out and won’t help people understand the mistake.  Like this boss they turn from serious adult-adult behavior to adolescent passive-aggressive behavior. This behavior is in a way worse than being yelled at, because at least when you have a yeller, you can know the mistake and make future adjustments. Here, you’re completely dis-empowered, left in the dark.

You could give an employee a big gift this week if you “cough it up.” Tell them if there’s  something they did that was problematic, and explain why it was a problem. Then give them a chance to show that they “get it,” and help them if necessary (with information, training, feedback) to get back on track, so you can both 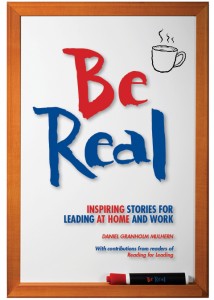 P.S.  Many of you picked up my new book Be Real: Inspiring Stories for Leading at Work and Home from my site or from Amazon.  I appreciate the confidence and hope you’re enjoying it.  If so, I’d love it if you share it with others or leave a comment on the page on Amazon where it’s listed.