Vic Granholm, my wife’s dad died on Tuesday past, January 21, 2020. His body was cremated, and he was memorialized at church. In many traditions,* the soul leaves the body at death, yet remains for a time. What’s next – whether an after-life, in heaven, in the body of some newborn creature, or not – is innately speculative. 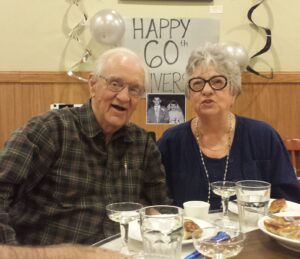 What is not speculative is that death gives us a chance to reflect: “What is the Value of This Particular Life?” We inquire about his or her particular essence:  “What story did their life tell?”

And we wonder about our own mortality, our soul which will, one day be inquired about, interpreted, told, and hopefully celebrated.

Victor Ivor Granholm came into life at a tough time, 1930. The Crash had turned into the Great Depression. Vic’s immigrant parents lived in a tiny lumber town in British Columbia. And no one was buying lumber. The speculation was that Vic’s dad was seeking a pension or insurance to protect his wife and 3-year old Vic and his two slightly older siblings, when he walked into a field and killed himself. Vic was born in poverty and raised through tragedy, but none of us can remember Vic ever complaining. He worked his way up from teller, to manager, to president of a start-up bank. He was EVER humble.

Vic was . . . A Leader.  My favorite kind. Everyday. And Every Day.  He was 88. Four strokes over 10 years left him with a very slow shuffle that was almost impossible to slow down to.  He also had some difficulties with cognition, and the other ravages of nature – eyes, ears, prostate, knees…. But nothing seemed to slow his fierce inner will. He never complained. After a small stroke last year, he had cut his daily 45-minute workouts down to about 25 minutes and “only” did them 3 days a week.  On the day of his massive brain hemorrhage, he had buzzed over in his little blue Smart car to 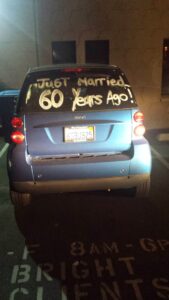 coffee and chatter with his buddies at McDonalds (“25 cents for the first cup,” he would tell us, “and free refills”), then to Trader Joe’s for provisions, then home where he made lunch and coffee for Shirley. “Your coffee’s ready dear,” he called to her. She walked into the kitchen to see him in his Lazy Boy, unconscious; he would not wake up.

There were over 100 people at Trinity Presbyterian Church for the memorial yesterday.  People were invited to take the mic for quick remembrance.  The congregation was nearly laughing out loud – and his wife of 65 years was surprised by it – when about the 10th person said, “I used to have coffee with Vic.” What a metaphor for awesome leadership.

I really don’t believe his spirit has gone to heaven yet, though I am sure it will.  So, while it’s lingering, I invite you to invite someone to coffee today, and just be kind and curious, kind and curious. May Vic hang about you as you