Back in the day (about 5th grade, as I recall, yet heading forward towards high school), we spent a lot of time putting other people down. Sometimes it was public. Most times it was when you were walking to school, from a game, or milling around at a dance, and somebody’s name came up. One categorization was thrown around quite a bit: “He (or she) is so immature.” I’m pretty certain my three surrounding sisters used it regularly to peg me. It often came with the invective: “Grow up!!!”

Whatever the heck “being mature” was, it was definitely something to aspire after. (Today, it’s often just used to describe films and who they are designed for, as in “for mature audiences.” And increasingly it seems to be a polite synonym for “old” or “elderly.”) But, hidden in there is some value content, don’t you think? Do you aspire to be mature, or did you automatically become so when you could legally drink, drive a car, or pay a mortgage?

It kind of feels like LEADERS should definitely be mature, right? And that some of us — or all of us some of the time — don’t “act” mature.

A few years back I ran across an amazing dialogue that captured the essence of maturity. And yes, it deserves, our aspiration. It has become my personal litmus test ever since. I offer it to you as a companion, a query to take through your day, especially with reference to those who “follow” your leadership:

“The trouble with the world,” said the Master with a sigh “is that human beings refuse to grow up.”

“When can a person be said to have grown up?” asked a disciple.

“On the day he does not need to be lied to about anything.”* – Anthony de Mello, One Minute Wisdom, 1986
So, “grow up,” aspire to maturity as you lead with your best self!
Dan 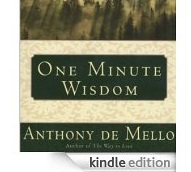 * Note: De Mello was an Indian Jesuit priest. He wrote simple koan-like dialogues, like the one above.  Here’s another absolute favorite of mine from him – the best short advice I’ve ever read about relationships:
“The Master offered the perfect solution to a married couple that was forever quarreling.
“He said, ‘Just stop claiming as a right what you can ask for as a favor.’
The quarreling instantly stopped.”