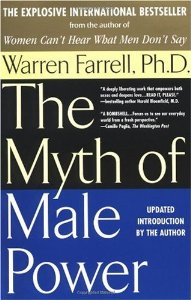 Cover of The Myth of Male Power

In an hour, I will join 10 awesome women and a very cool guy to be feted by the Michigan Women’s Hall of Fame.  Thomas Bisonnette, the Associate Executive Director for Nursing Practices at the Michigan Nurses Association and I will be receiving the Philip A. Hart Award for demonstrating a “unique understanding and support of  women’s issues and concerns.”  To be associated with Phil Hart is one massive honor!

I am honored.  Like all great awards this wasn’t something sought after, but was instead a bonus for something already great.  I have had an extraordinary opportunity to serve my wife, to relate to my kids, and to escape from the confining box of 1950s manhood into which I was born. I hit the jackpot when I married Jennifer Granholm in 1986.  I see the Miller Lite commercials with the guys who can’t say “I l-l-l-l-ove you,” and after I’m done laughing, I feel a deep sense of sadness for the way we raise boys and men.  My dad did say “I love you” you to my mom and they were the surest and proudest words he ever spoke. But he was also throttled by his times. When he was dying of cancer, he lacked the words to express his deepest human emotions.  He couldn’t begin to say, “I’m afraid.” Or, “I’m sad,” or “I will miss you, Mary.” He was so bottled up with sadness (perhaps partly from PSTD from his days as a medic in Korea) that he couldn’t begin to ask my mom, “How can I help you, sweetheart,” or “Could you do this for me?”

My dad’s emotional muteness was not a funny Miller Lite commercial. That was instead the tragic result of decades, centuries, maybe more of men learning to be “strong” and “fearless.” I am so grateful that in supporting my awesome wife, I have gained some major liberation from the shackles of that internalized oppression.  I have become aware of and in some good measure free of what Walter Farrell called The Myth of Male Power. I am free to be aware of and express the full range of human emotions – to be sad, or scared, or sentimental, and not worry that I have compromised my manhood.

Without Jennifer Granholm I would not be within a thousand miles of this award. And without my great Jesuit education, which inculcated in me the desire to be a “man for others,” I would not be here.  I am proud that I have followed a call to serve my bride, my wife, my governor.  My gender education never prepared me for this. According to my socialization, I was the one who should have been governor – the focus, the leader, the man. But I have learned the value of service played out in the shadows, or with a sick child, or with a wife who doesn’t always need my supposed brilliance.  I have learned to love and lead as women have.  And I think I am a better man for it.