Maybe it’s not just us humans. “Monkey see. Monkey do,” we used to say to each other as kids. But as humans, we can raise our leadership skills by reflecting on those who excel at it.  The passing of John McCain has set many to ask, “just what should we take away from such an amazing – and complicated guy?”  I’d offer one point of reflection:  Partner.

McCain was known as a maverick, proclaimed himself a “straight talker” and frequently surprised his colleagues with the stances he took, which appeared only when he was ready to take them. He was notoriously prickly and sometimes hot-headed well beyond his high-testosterone-twenties.  So, partnership may seem like an odd choice to highlight?

But his record stands as an invitation not only to politicians but to all of us to open our minds enough to see through others’ eyes and to communicate well enough that we can craft unique solutions.

He would jokingly introduce Democratic Wisconsin Senator Russ Feingold as the leader of the communist party in America, but the two of them worked year after year after year until they finally passed the McCain Feingold Campaign Finance Act, putting some limits on the runaway role of money. 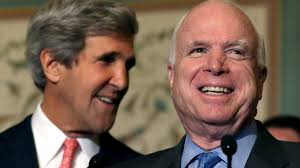 He was a defense hawk, an advocate for the wars in Vietnam and in Iraq, yet he and Senator John Kerry transcended their political divide that others insisted they uphold, to bring a true end to the Vietnam era, to reconnect with the country of Vietnam and heal the terrible rift our country was still feeling.

In his most recent partnership, he and Democratic Senator Chris Coons of Connecticut introduced compromise immigration legislation to deal with both DACA and border security – despite all the partisan political posturing that continues to keep the parties from a common sense solution.

As humans we so easily harden into camps:  sales vs. marketing, corporate vs. the field, the boys against the girls, not to mention the Rs vs the Ds, and even the divided camps warring within those political parties.  McCain was a pragmatist and a communicator, and he brought those two attitudes together to form powerful partnerships.

He got lots of people mad. Got me mad. Got his party mad most recently when he blocked the attempts to repeal Obamacare, and when he fought the confirmation of a CIA director because he opposed her record on torture. He’s a model for that independent conscience.  Yet, paradoxically, it didn’t stop him from communicating across the lines to lead by two – with Feingold, Kerry and Coons. And without such commitment to partnership, the limits to change are severe and foreboding.

With whom might you partner to protect common sense and fashion pragmatic solutions to real problems, and thus