Thank you to the 117 of you who have answered my 2-question survey on first level supervisors. I think we would all like to see a bigger “N,” so here’s a second chance: I’ll take Dan’s survey on what I want(ed) from a first-level supervisor. I’ve been surprised by the initial results and will write about the findings next week.

Although “women’s liberation” began to challenge norms back in the Sixties, and has been with us ever since, I wonder if we’re at a new inflection point. With Senator Klobuchar’s announcement, the Dems now have four women running for President.  The big jump in women in the House is depicted below: 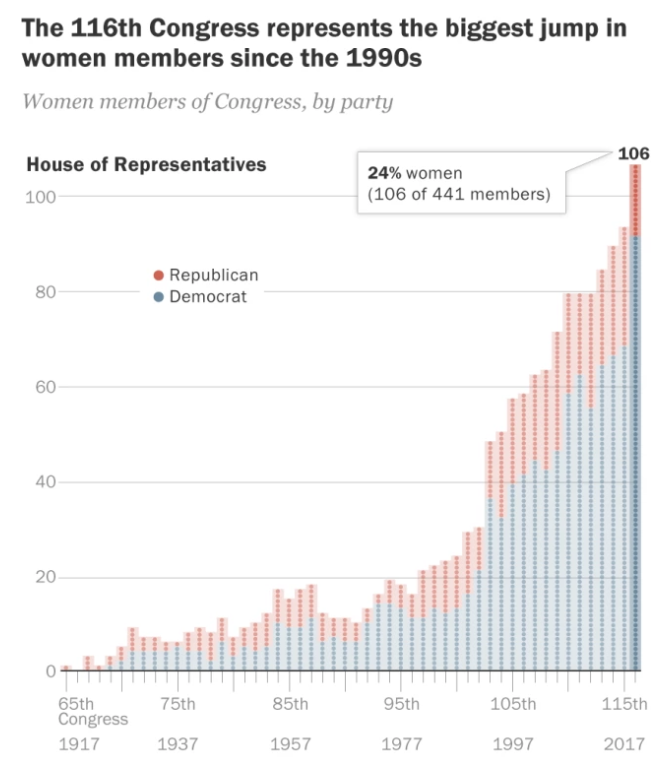 So, what’s left for us to do? Those of us who fashion ourselves everyday leaders? Four things.

1. celebrate! Women’s victories are everyone’s victories in the sense that they demonstrate freedom to participate and openness to diversity.

2. see the distance yet to go. The steep growth rates to the right are a marvelous picture, but a pie chart would show that women in the house and senate occupy 1/4 of the total seats.

3. gain personal awareness of lurking bias.  You…are…biased. Yes, I’ve said it.  I’ll bet you feel defensive, perhaps want to go on the offensive with me, but consider what I’m saying.  I don’t mean you are intentionally biased.  But as Malcolm Gladwell popularized in Blink, our unconscious minds make judgments at blinding speeds without our awareness let alone consent.  Our minds are steeped in culture, culture is steeped in history, and history is paternalistic.

If you don’t believe me, take an Implicit Association Test.  They are fascinating experiments, which reveal how our brains outrun us. It takes about 5 minutes, if you’d like to give it a spin.

4. be an ally: lead by two.  One of the most significant and noble ways to lead is to . . . invite someone else to lead.  In classrooms and boardrooms, in general, men will assert themselves freely, while many women play by rules of courtesy, only to be ignored or talked over. So, defer, nod, invite, ally. Empower others as you

P.S.  Do consider adding your voice to the survey on what you want(ed) from a first-level supervisor.