Dan has been writing Read2Lead weekly since March 1, 2000. Twenty years! A new era of Read2Lead begins today, with Dan’s partner Laura Andersen, weighing in. She will now periodically contribute, as they lead by two! The topic is right on point. 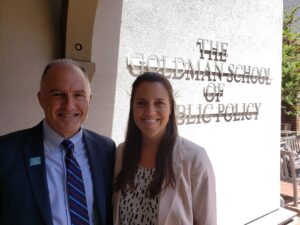 In a recent post, Dan described his experience speaking to students as their reactions shifted from enthusiastic, to bored, to angry. As his “Number 2” that day, I was gesturing behind him, instructing students to react to the message that he was delivering. This is the role that “The Leader” often asks middle managers to play: “Here is the news that I’m delivering today. Please be sure your messaging is consistent with mine, be supportive of your people to ensure they respond well.”

Our exercise in class mirrored that situation, and tested the impact of the Number 2 and their power in the interaction between Number 1 and “his” people. We explored three options in class.

Reaction #1: Lean in with great interest. I mirrored Dan’s enthusiasm for the topic and thus encouraged others to join. Ideas and energy filled the room. At work, the Number 2 serves as a conduit for positivity and vision, even filling in details about how the news will play out given their knowledge of the work on the ground.

Reaction #2: Act bored. I displayed my own boredom, and they followed suit. In the real-life case, the Number Two receives “The Leader’s” message and, instead of serving as a conduit and even amplifier for the original intention and energy, shifts the tone to one of indifference. They deliver the message, but without the emotion; they deliver the idea, but without enthusiasm. And those who hear them, trust them, and seek their approval as direct reports, absorb that “meh” energy and send it right back to “The Leader.”

Reaction #3: Be angry. While he spoke about values with conviction and passion, I invited the class to respond with hostile looks. The glares were astounding. I saw Dan stumble, grow uncomfortable, and lose confidence in the message that just one-minute prior he had been delivering with clarity and poise. The class created a worse leader – certainly a worse speaker – for themselves.

Dan was “The Leader” of the exercise, both by delivering a message and in physically standing in front of me to lead the class. And I was behind him, choosing whether or not to “have his back” when he could not see me. For the sake of the exercise I was intentionally out of sync with him, his vision and emotions, and thus his advocacy. In reality, there is always a choice: back the vision, disengage, or fuel the resistance to it. The upside potential is huge, as you merge vision with practical day-to-day reality, bringing the vision come down to earth and bringing the earth up to the vision to ensure alignment as a team toward greater organizational success.