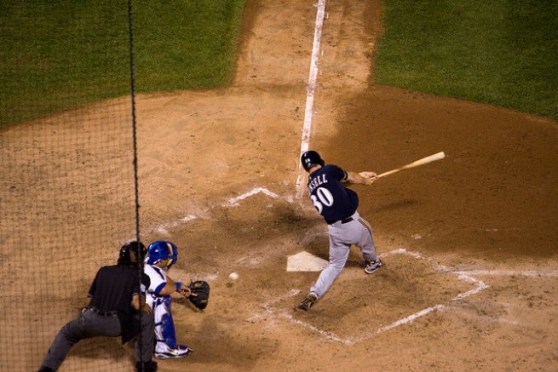 What if you screwed up a lot? Made judgment calls that didn’t work.  Relied confidently on past experience only to find out that there were different variables at play this time.  What if your people messed up a lot, like missed their goal 70% of the time?

So, consider this: last year only 23 of 144 players* in Major League Baseball got hits in more than 30% of their  at bats.  And the most successful wasn’t much better – just under 34% of the time he got a hit.  Can you imagine, “stepping up to the plate” — as we say in our life-and-business-jargon — and failing 70% of the time?

“Baseball screws everybody! It takes no sides, it’s a game of failure.”

In his book Life is Yours to Win, he writes:

“As a game of failure, baseball is a fickle mistress.  I tell our players that . . . often.  Yet, it’s true; someone fails on every play. Sometimes several people fail.  The pitcher fails to get a strike. The batter swings and misses.  The base runner is thrown out.  The fielder makes an error.  The coach gives the wrong sign. . . [Ellipses in original]  It sometimes pains me to admit that my favorite sport is so cruel.”

Garrido is a coach and as you can see, a philosopher.  The big lessons don’t escape him when he talks about baseball to his Division 1 college athletes, for only 1% of them he says,will be able to support themselves playing baseball.  He says failure is a teacher.  You learn to win by losing.

And his specific instruction to his players seems so worth sharing:

“If you let the negative things overwhelm you and overpower you, you will be f****** miserable. That’s all there is to it. If … [a failure] bothers you for awhile, if you got to think it through, nothing wrong with that. You got to work some things out in your own head, nothing wrong with that. But when you show up tomorrow it’s a new day and you need to see the opportunity.”

How much better we would be, if we could practice the discipline these players must develop to let it go, not fear failure, but step into the batters box, again and again.

If you’re like me, you’re still holding on to some failures.  Some big.  Others quite trivial.  What if you let a couple go this week.  Practice letting them go.  Even if you only succeed 30% of the time in that task, you be better at

Note:  Garrido is no saint. Remarkably, he allowed the cameras tremendous access to him.  One of his tirades is easily found on the internet; often without the context which makes sense of it. But after dropping about 20 F-bombs on his players, seemingly spent from his tirade, he slows for a second and says, “I have totally failed you guys.” He begins again lashing out (not at particular players or plays but at “our failure” to play the way we can), and before he walks out, he says, “I’m sorry.  I apologize. I have totally let you down.”  It’s a remarkably live and raw example of a person who is driven to succeed, feels the total anguish of disappointment, appears to project that anger (and he would say fear — that he’s not that great a coach) onto his players, but in the end owns it.  You could write a psychology book for leaders on this one scene.  Here it is, not to be listened to with children or at work or for those offended by vulgar language:  http://www.youtube.com/watch?v=Is6xa3UlTYs

* For baseball aficionados: The overall number is low, because it’s only those who had enough at bats to qualify for the batting title. And of course some people got on with walks and errors. So the failure rate is admittedly a little bit high.