Are you, as I am in middle age, drawn to enchanted memories of early years? I can see, even smell certain places I haven’t been in 40 years. So my brother Pat repeatedly says to me, “Danny, we’ve got to go back and play Birmingham [Country Club].” He and I caddied there. We spent hundreds of hours: 120 pound youngsters carrying 40 pound bags. Knew every hill, shrub, and green, every dog leg turn.

I was a really good caddie — a really lousy golfer. Still a hacker, I don’t understand why I find myself on weekends riveted  to the golf channel. On our big screen it’s like I’m right there on that “good walk spoiled,” as some golfer describe the frustrating sport.  I love the two forms of magic:  The gorgeous greenery on the one hand, and the cameramen’s abilities to track a tiny ball projected nearly into outer space. The magic drags me arse to the couch. Yesterday I was inspired by two partners.

I’m a lefty and so have always cheered for golf’s longtime #2 player, Phil Mickelson, Lefty. On the last day of “The [British] Open,” when the course at Muirfield in Scotland was slaying the leaders, Mickelson came from far behind with miraculous shots and won by three strokes, in golf a mighty margin of victory.

He pumped both fists after his last putt fell, and walked off the green with his arm around his caddie, Jim Mackay, aka, “Bones.”*  Mackay is not a punk caddie like I was. He’s 6’4”, 48 years old, and a super player in his own right. And on the big screen he caught my eye, the way he was pulling his baseball cap down over his eyes. And hunching his shoulders. He was verklemmt, crying, couldn’t find the off-switch. Ten minutes later, Mickelson, asked about Bones told the TV interviewer:

“I can’t explain what it means to have a friend and a partner and a caddie, [like] Bones…He did such a great job this week, managing clubs. There are three different clubs you can hit on every single shot, depending on how much you move it into the wind or let it fall with the wind, and he did a great job all week.” MacKay, servant leader, doesn’t give interviews, but yesterday when he was cornered by a reporter he said, “After 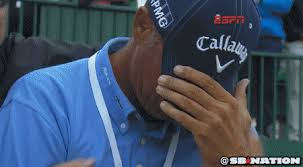 you work with a guy for 21 years, it’s pretty cool when you see him play the best round of golf he’s ever played in the last round of the British Open.”

I guess my 8 years of being the “first gentleman” (aka the second fiddle) sensitized me to the beauty and sometimes the power of being a solid servant leader.  So many of us lead from behind or like a caddie, from beside.  We don’t deliver the speech or the sermon, don’t get the CEO pay, don’t shoot the shot, make the final call, or swing the eight iron like Lefty. But we sure share the celebration when our leader has such a great day.

And kudos to leaders like Phil and to my bride who give so much credit and allow such a deep human connection — as Lefty said, “a friend and a partner, and a caddie.”  Don’t you love that order?

What Jim Kouzes likes to say seems to fit Lefty, Bones, and hopefully you and me,

*How ironic that Bones was so named when one of golf’s great guys, Fred Couples, couldn’t remember his name. That’s a caddie’s life, right there: the invisible servant!