Here are two simple images of an organization – a classroom, locker room, a start-up, a division: 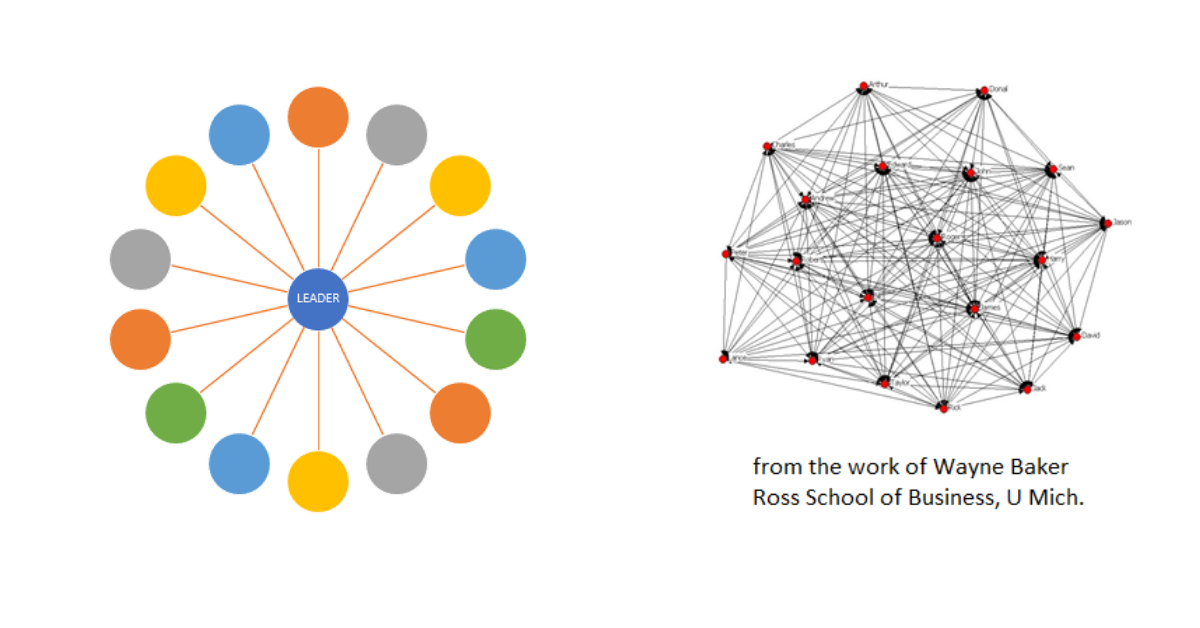 The drawing on the right is excerpted from fascinating work by Professor Wayne Baker of the Ross School of Business.* My simple point is this: Which would appear more dynamic and powerful?  One in which individuals primarily relate to the authority figure in a spokes-in-a-wheel fashion, or one in which there are dynamic relationships throughout the organization?  The answer appears obvious.

I am completing one of the most energizing teaching experiences I have ever had – a 6-week undergrad course on leadership with 45 participants, primarily international visitors from France, India, Brazil, Japan, China, Singapore, Malaysia, Mexico (at least).  Imagine how much they have to learn from each other?!! Although whole countries and many profs haven’t heard the word yet:  “the age of the sage on the stage is over!”

Did I mention that my class meets at 8:00 AM with 20 year olds who stay up late, road trip on the weekends, and are biologically prepared to sleep in?  I can see them at times looking at me, as if they are riveted (we all learned this trick by middle school: look interested while you space out), but I can sense at time that they are 10-100% . . . well, gone.  At those times, I articulate a clear question and say, “pair and share.” This invites them to engage, focus, and own the work.

In my rough drawing on the left, there are 16 relationships.  Can you count the number on the right? In each of those nearly two-hundred dyads depicted, the possibility exists for them to gain the outcomes that John Gillis and I have been finding, increases in  creativity, accountability, feedback, and encouragement (a topic Professor Baker and his colleagues at the Ross School’s Center for Positive Organizations are studying).

A leader – whether “the” leader or not – can increase these outcomes by promoting the power of two’s.  And here is a simple suggestion for next time you are brainstorming, debriefing a completed project, or assessing a breakdown.  Say these simple words:

I think back to governor’s meetings my wife ran; her people were professional and highly attentive. Still, there would have been so many benefits to an occasional break in the spokes-on-the-wheel action to invite the entire room to re-engage intently in pairs and thus,

lead with their best selves!

*Professor Baker’s drawing is a computer-generated rendering of the answers of the 20 people represented by the red dots about how the other 19 people energize them.  After interacting with them do they feel much more energized, more energized, about the same, less energized, or much less energized.  Arrows (difficult to see in this small piece) indicate whether a person feels energized by another (the arrowhead point to them) and/or is reported as energizing the other (arrow heads points away to the other).  Baker and his colleagues demonstrate powerful results in environments that generate high levels of energization among respondents.